Just how many times can you excuse blatant failure by saying, "Well, it's a tough job, and they're doing their best. Mustn't grumble…"? At least 80 times, evidently. That's how many rounds of Order of Australia awards have seen women under-represented since the honours were set up in 1975. It happens twice a year, on Australia Day and the Queen's Birthday.

We've heard all the excuses: fewer women are nominated; women aren't yet at the top of the tree in their chosen profession. "Just wait until they start running big companies," we're told. "They'll soon show up in the listings!" There are answers to these excuses, but I've got no interest in making them. What matters is where you draw the line between the excusable and the inexcusable, and the awards situation is just inexcusable.

It's getting worse, and I reckon I know one big reason why. The Council for the Order of Australia itself is off kilter. In 2000, seven of the 19 members of the Council were women; not equal representation, but not bad considering. Currently there are three women out of 17 members (two of the seats are vacant) - the lowest number this century.

The Council is made up of a nominee from each state and territory, plus the chief of the Defence Force (what's that about - more jobs for the boys?), a representative of the Federal Executive Council, a representative from the Department of Prime Minister and Cabinet, and eight community members, who are appointed by the Prime Minister.

Under our reformist former Minister for Women (it's a joke), the number of federal nominees who were women dropped from three to none. Not one woman did Tony Abbott appoint to the Council to represent the community - which is made up of more than 50% women.

So, with the federal government letting us down, how about our reformist state governments? If state governments were sincere about addressing the issue of female under-representation, they could nominate women for the Council. They haven't, so we can conclude they're not.

Enough is enough. The two men who can do something about this - Governor-General Sir Peter Cosgrove and Prime Minister Malcolm Turnbull - should actually do something. They should disassemble the Council and start again, implementing the government's own policy that government boards should comprise a minimum of 40% men and 40% women (it should be 50/50, but let's save that one for another time).

The Council is overwhelmingly male, pale and stale. Members (other than the ex-officio ones) are appointed for two years and may be re-appointed. The Western Australian appointment has been on the Council for 18 years. Eighteen years! It's past time for change.

As well as re-engineering the Council, we need to put in place steps to overcome the hidden but forceful bias that determines that we, as a society, don't see women's contributions as important. Forget urging people to nominate more women (we've done that until we're blue in the face). We need to impose quotas on the number of awards that are given out. The Council should be instructed to hand out however many awards they want to give out to women, and then give awards to exactly that number of men as well.

Hang on - don't start bleating about the evils of quotas unless you're willing to speak out against the quotas that the Council has in place already. Quotas apply to the number of honours awarded, the level of honours awarded (men consistently get the AOs and ACs, the highest honours) and the make-up of the Council itself - one from each state, and so on.

We need to fix the incentives so that men can't just lie back and enjoy the fruits of a rotten system. If male surgeons, for example, were made to realise that their owns AOs were dependent on getting more women in front of the umpire, they might start spreading their nominations around more evenly. Nobody has a right to an award, and men who missed out because of the new policy would be helped to understand how women feel all the time.

Carrying on the way we've been going is just enabling abuse. If the bias can't be removed now, this year, it would be better to shut the whole business down altogether.

The graphic that shames the Order of Australia Council: 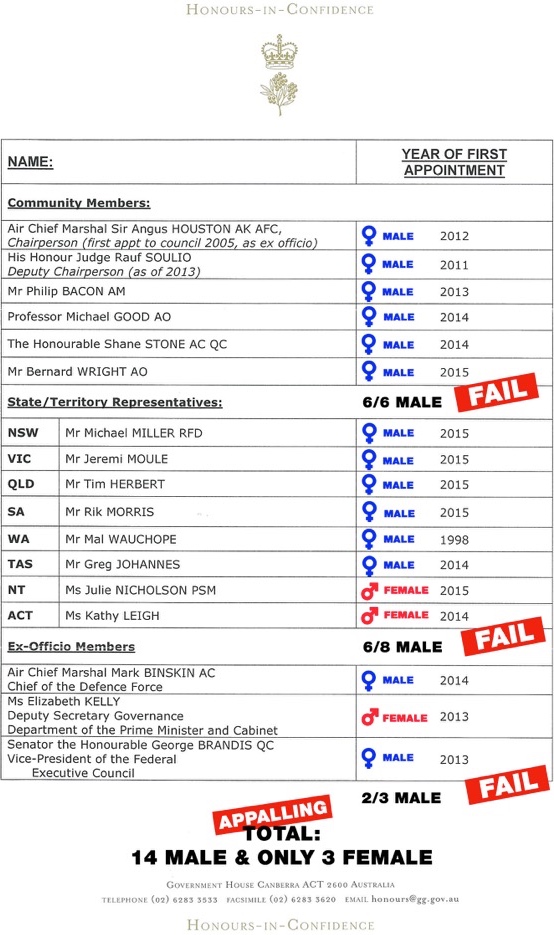 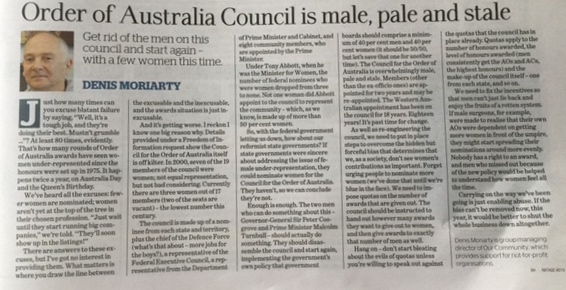