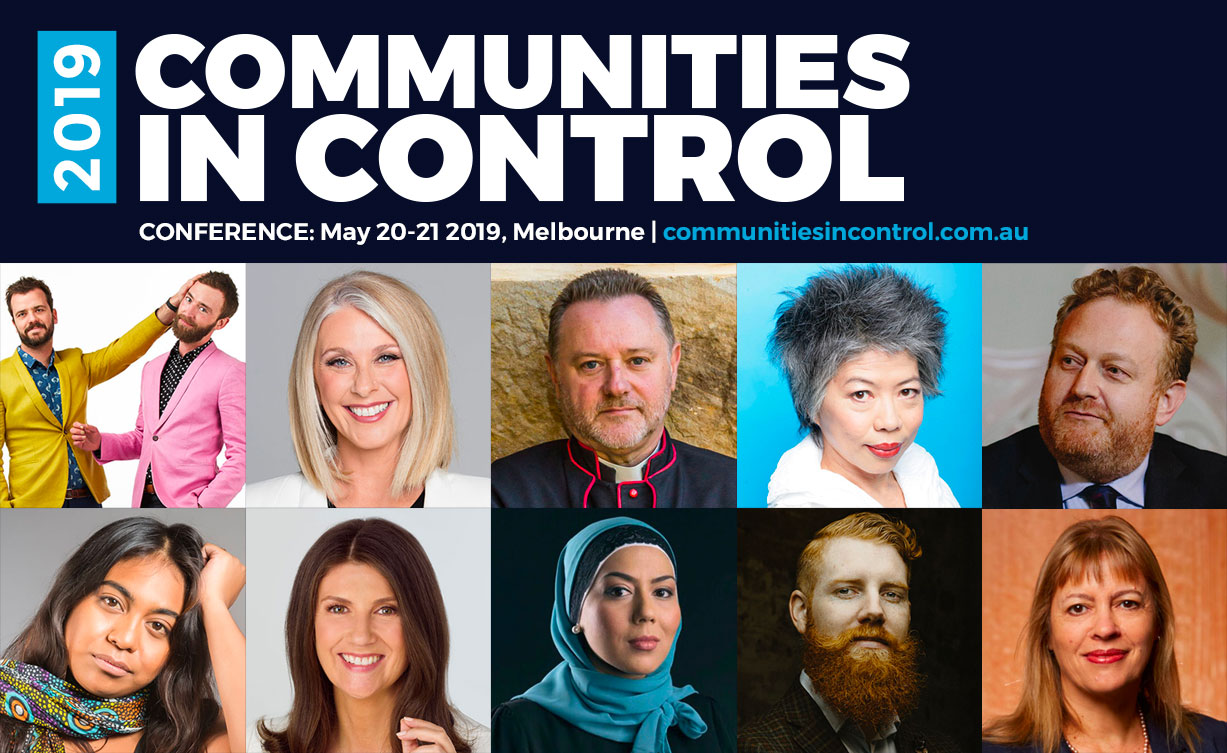 Post-poll conference to fire up community

Community organisations aren’t waiting for the new Federal Government to get settled before they set their own agendas on climate, refugees, gender equity, indigenous rights and social justice.

Two days after the election, one thousand delegates from across the country are converging in Melbourne for a two-day event with the theme “Get Angry. Then Get Organised.”

The one-of-a-kind Communities in Control event on Monday-Tuesday, May 20-21, at the Moonee Valley Racecourse for its 17th year, provokes and inspires community groups with a program packed with campaigners, mavericks, advocates, intellectuals and artists.

Organised by social enterprise Our Community, the program is unapologetically political and progressive, according to group managing director Denis Moriarty.

“This is all about making Australia and the world a better place through powerful community organisations taking charge of their own destinies. They’re the ones who do the most to improve the lives of others, and we’re doing our bit to give them a spark.”

"Every one of these people is an outsider – or perceived as one – and they're all trying to change the status quo.

"This is why I'm in this game, and that is why Communities in Control is my favourite event on the calendar. Who knows how things will play out?"

Here are some highlights:

The apology: To the refugees, we say sorry Refugee Legal executive director David Manne will deliver an apology for the way we've treated asylum seekers in this country. He'll be joined by former PM Malcolm Fraser's daughter Phoebe Wynn-Pope, a powerful advocate for refugees.

The #MeToo Movement: What's next? Household name, journalist and provocateur Tracey Spicer took on the old boys with her campaign against sexual assault and harassment in our workplaces. She reveals how she channelled her rage for good.

Trailblazing: Navigating without a map Cult figure Lee Lin Chin has been a news presenter, journalist, fashionista and social media sensation. She explains how and why she's broken the rules.

The Joan Kirner Social Justice Oration Professor Helen Milroy, a commissioner for the royal commission into child sexual abuse, will deliver the first-ever oration held in memory of the late and pioneering Victorian premier by an Indigenous person. We don't expect her to hold back in her assessment of some of the biggest taboos and toughest challenges of our time.

All justice is social Anglican priest Rod Bower is an unabashed social justice warrior, known for provocative billboards outside his Gosford church, campaigning over climate change, racism, refugees, violence against women and any kind of intolerance. He’s running for the Senate.

Of course, that's just a taste.

For comment by Denis Moriarty, to attend, or for speaker interviews: Matthew Schulz matthews@ourcommunity.com.au