The head of the new Australian Financial Complaints Authority (AFCA), which starts business on November 1, has promised easier access for those needing help with finance disputes.

As well as tackling complaints from disgruntled individuals, the free and independent service will be accessible to charities and small not-for-profits (those with fewer than 100 staff).

AFCA takes over the work of three bodies: the Credit and Investments Ombudsman, the Financial Ombudsman Service Australia, and the Superannuation Complaints Tribunal.

AFCA head David Locke – a former assistant commissioner with the Australian Charities and Not-for-profits Commission (ACNC) – said AFCA would have a greater focus on helping people most in need. 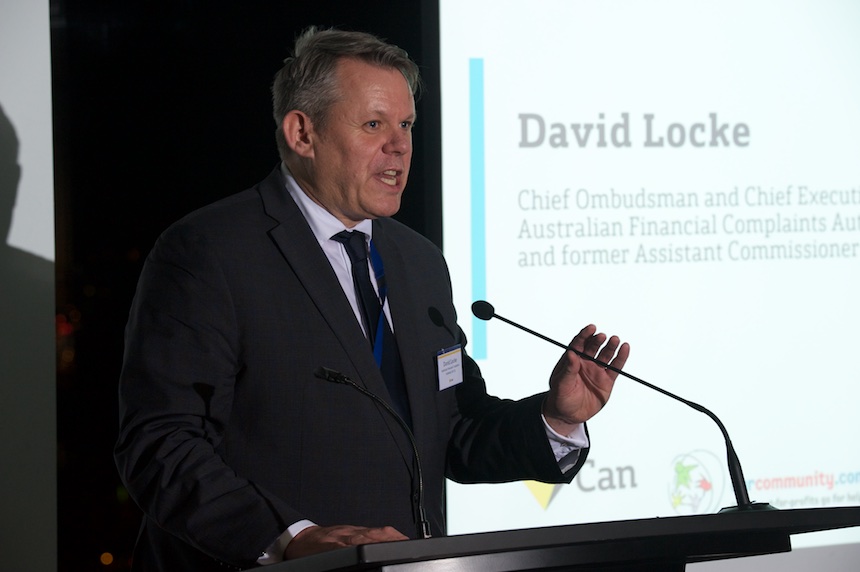 The Australian Financial Complaints Authority chief David Locke has a long history of involvement with charities and not-for-profits.

He said many of the 55,000 cases AFCA is expected to tackle each year would arise from “people in hardship and people in difficulties”.

And he said the not-for-profit and charity sector played an important advocacy role for vulnerable members of the community, who were often targets of unscrupulous operators.

“Often the not-for-profit is really the bridge between the person experiencing those issues and getting a fair resolution.”

Mr Locke said one of the top priorities of the organisation would be to improve access to vulnerable consumers.

“We're going to be taking significant measures to make the service much more accessible for people right across communities,” Mr Locke said.

“I want to make sure that whoever you are, that you can use the service. And we recognise that most of us are not experts in financial services products and businesses. And we recognise it's not an equal playing field necessarily, if you're in a dispute with your bank. So our approach is very much to assist people and to provide extra support where people need it.”

Those in financial hardship will also be protected by powers that enable AFCA to freeze any other enforcement action while it negotiates a settlement.

Beefed-up powers give AFCA the ability to rule on losses of as much as $1 million, and award up to $500,000 in compensation. There’s no limit on awards for superannuation cases where people’s homes are used as security.

The new body’s increased accessibility extends to its name, which no longer contains the term “ombudsman”.

Mr Locke notes, “a lot of people don’t know what an ombudsman is”, whereas the new name “says on the tin what it deals with – which is complaints about financial firms”.

“I think in the past if you look at some of the ombudsman schemes, some of them look very difficult, they're quite hard to understand and to use. We'll have a real emphasis on outreach, on working with financial counsellors, working with not-for-profits in the field.”

He said the focus of AFCA would be to aim for negotiated solutions, using conciliation and mediation where possible, but with the power to make binding decisions.

Consumers can still decide to take their case to other authorities, if they choose: “They haven’t surrendered any of their rights, so it’s really optional for the public.”

AFCA – a not-for-profit in its own right – will be funded by compulsory fees paid by Australia’s financial firms.

More Our Community news: News you can use from the not-for-profit world.