Northern Territory donors among the most generous in Australia

Following a recent inquiry by ABC News Northern Territory, we investigated (1) whether or not the average GiveNow donation value in the NT was not just larger, but also statistically significantly larger than the average donation in other states, and (2) the underlying reasons for the apparent generosity of NT donors. We found that NT donors do indeed donate statistically significantly higher amounts, on average, compared to most other states (with the exception of NSW). Where this difference stems from remains an open question, because correlation does not imply causation. Part of the difference may be attributed to the above-average generosity to Indigenous causes, and the observation that men in the NT donate higher amounts than men in other states (but keep in mind that women donate more frequently than men, especially in the NT).

In September 2018, Our Community's Innovation Lab team was approached by ABC News with an inquiry about the average GiveNow donation value in the Northern Territory (NT). In our analysis of 15 years' worth of donation data, published as part of the 2016 "Who Gives?" report, we found that average donation by donors from the NT ($92.60) was higher than all other states in Australia. ABC NT sought to highlight the apparent generosity in a radio/interview segment.

At the Innovation Lab, we investigated two things in response to the media inquiry. Firstly, we checked if the average NT donation was not just larger, but also statistically significantly larger than the average donation in other states. The number of donations stemming from the NT is (naturally) much smaller than the number of donations from other states, so we had to rule out the possibility that a small sample size resulted in a statistical "fluke." Secondly, we wondered why the average donation in the NT was high. Could the preference of NT donors for certain high-value causes play a role? What if we only considered small donations (e.g. $100 or less) - does the average in the NT still exceed the average in other states? In this blog post, we will summarise our findings.

There were two interviews with Denis Moriarty (Our Community's Group Managing Director), in which some of the conclusions are discussed further, which are:

Is the difference statistically significant?

One of the most important questions in any statistical comparison is whether or not the difference is statistically significant. Are we looking at a "true" difference, or is the difference caused by chance? When we collect donation value data, we are effectively "sampling" from the true distribution of our donors' generosity. As such, we have to be careful in our analysis, especially if the sample size is small (which is true in the NT due to the smaller population).

Fortunately, statistical analysis techniques allow us to make sure that an observed difference is a true difference. You may have heard of p-values or confidence intervals. Without going into too much detail, we ended up using a special test for the comparison of more than two averages (to compare eight states) called "Tukey's test." More specifically, for the experts out there, we calculated the confidence intervals using Tukey's Q critical value as outlined here. The result is a plot that we can readily interpret: 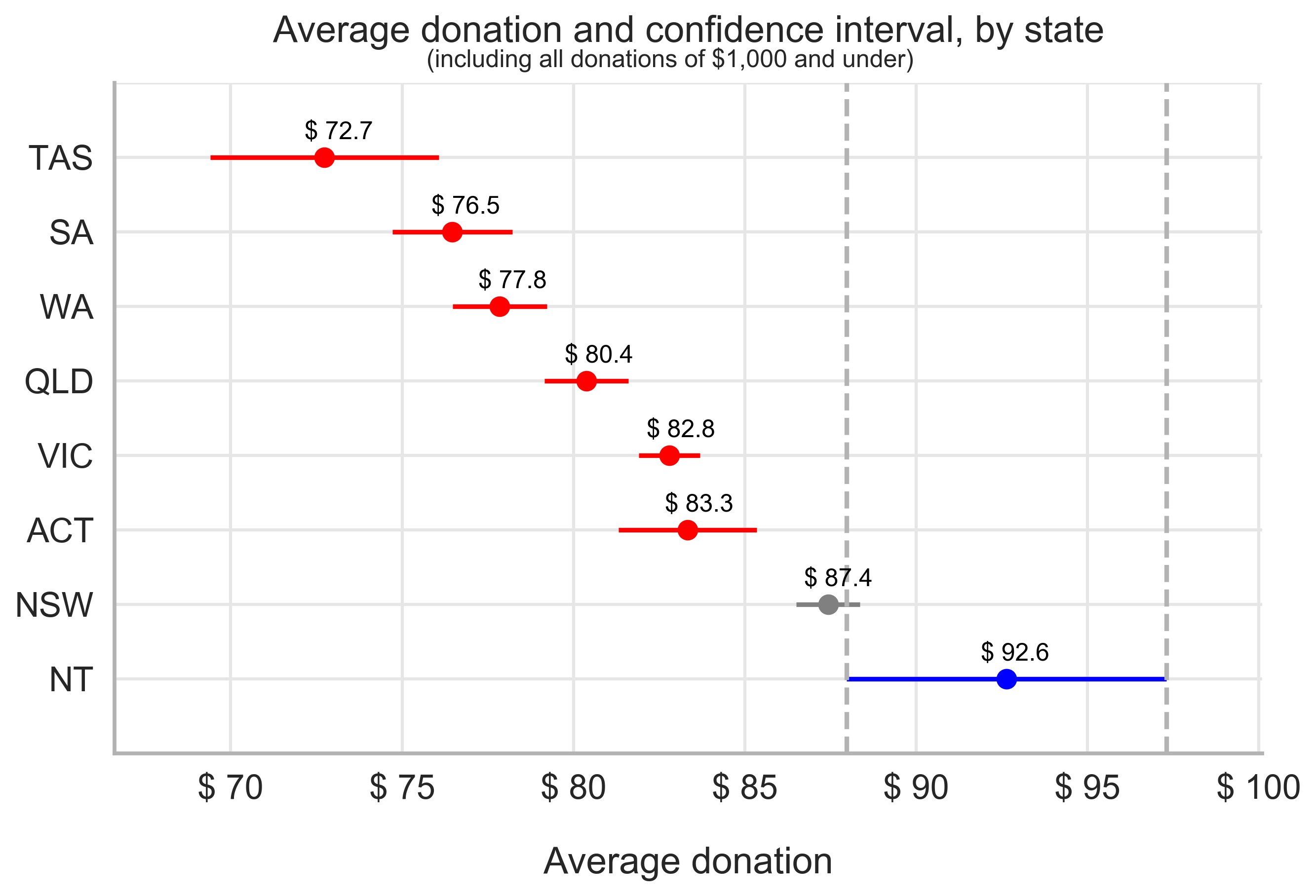 How to interpret this chart

Because the confidence intervals of NT and NSW overlap, we do not know (for sure) whether the difference in average donation between NT and NSW is a true difference, or a difference due to random chance. The confidence interval for NT is relatively wide because our sample size for this state is relatively small. We are more confident in the average donation value of NSW, on the other hand, because we have more data for this state. In conclusion, our statistics suggest that NT donors give more than anyone else in the country. We know for sure that they give more than every other state, apart from NSW (where it's a close call, but with the NT still quite possibly out in front). Notably, NT has been leaps and bounds ahead of the country's most southern state, Tasmania, with a donations gap of about $20.

So why are NT donors more generous?

That's not an easy question! First and foremost, we have to remember that correlation is not causation. While some factors may coincide with increased generosity in the NT, they may not necessarily be the underlying cause. There may be plenty of underlying variables that do not exist in our data (e.g. peer pressure effects) that may very well explain some of the differences we see. Keeping this in mind, we looked at:

In the previous chart, only donations of $1,000 and less are included, representing 99% of all donations, to reduce the impact of high-valued outliers (e.g. one $20,000 donation). We wondered, however, if NT donors were also more generous than (most) other states in the smaller donation ranges, such as $0-$100 (86% of all donations). In the next chart, the average donation for each state is compared for all donations of $100 and under. 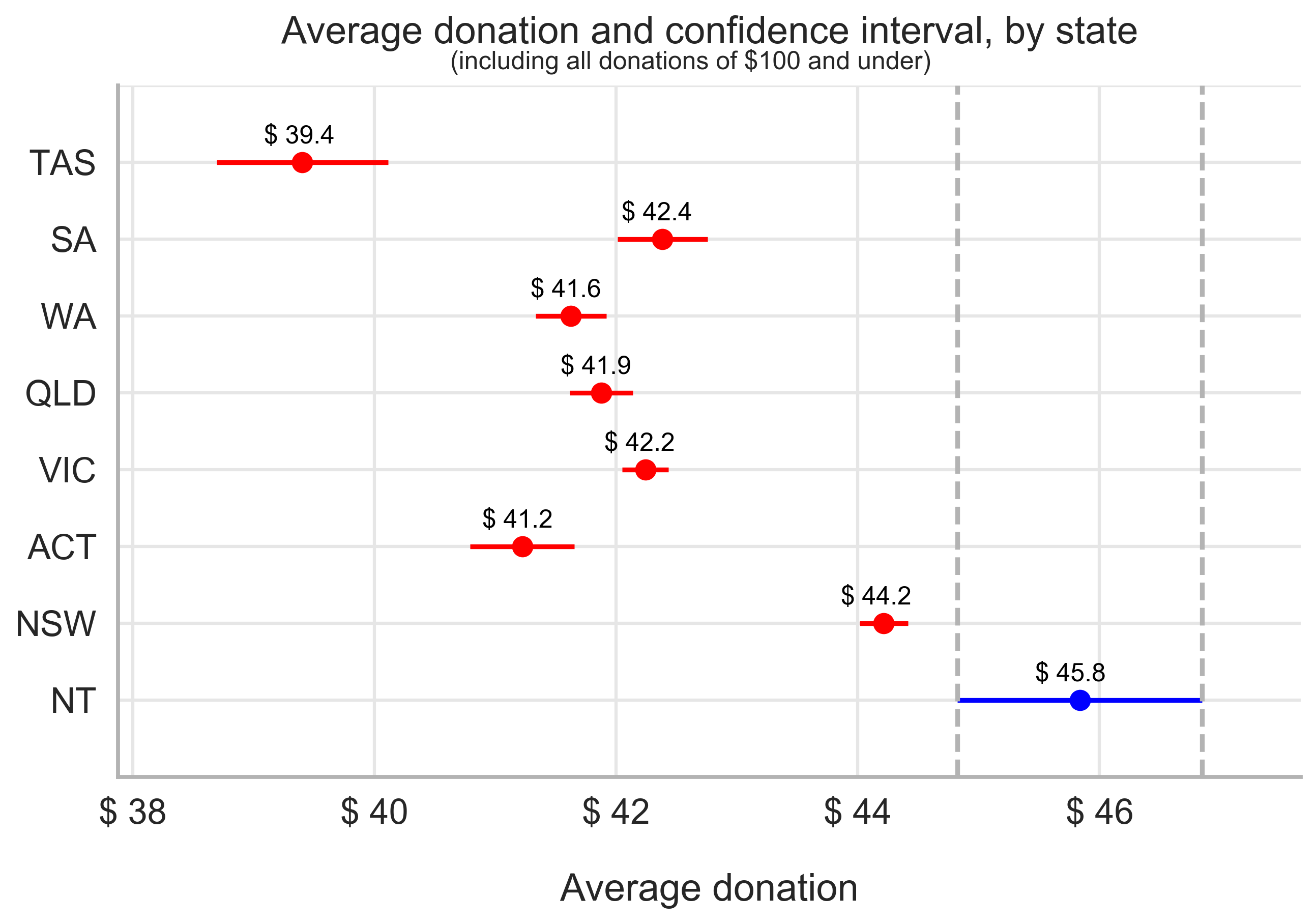 This time, the NT average of $45.80 is statistically significantly larger than the average in all other states, including NSW. Tasmania stands out on the other end, having a significantly smaller average donation of $39.40. The same conclusion holds true if we look at even smaller donations, in the $0-$50 range, indicating that NT donors are some of the most generous donors nationally, both through large donations ($500-$1,000) and through small donations ($0-$100).

We can categorise all donations (for the NT, and for all other states) by the "interest areas" of the corresponding causes, to gain an understanding of the cause preferences of NT donors. The "interest area" of a cause is the general type of cause, e.g. Animal Welfare, Arts & Culture, Multicultural, etc. The result is shown below, as the percentage of donations (left) and the average donation value (right).

We can dig a little deeper by looking at the two donation value ranges examined earlier. In the next chart, we show the average donation, by state, for all donations made to Indigenous causes of $100 and less (left) and $1,000 and less (right). 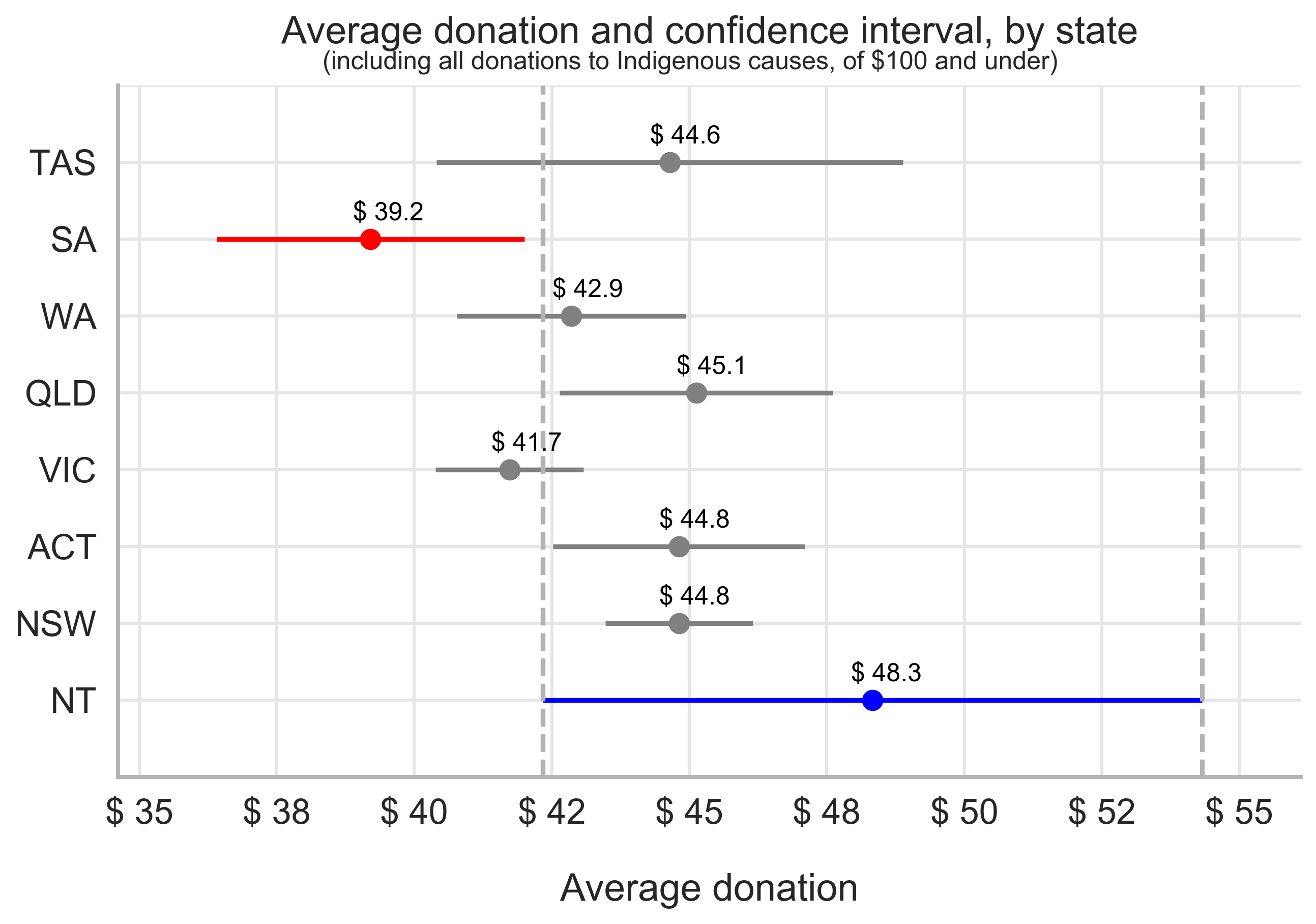 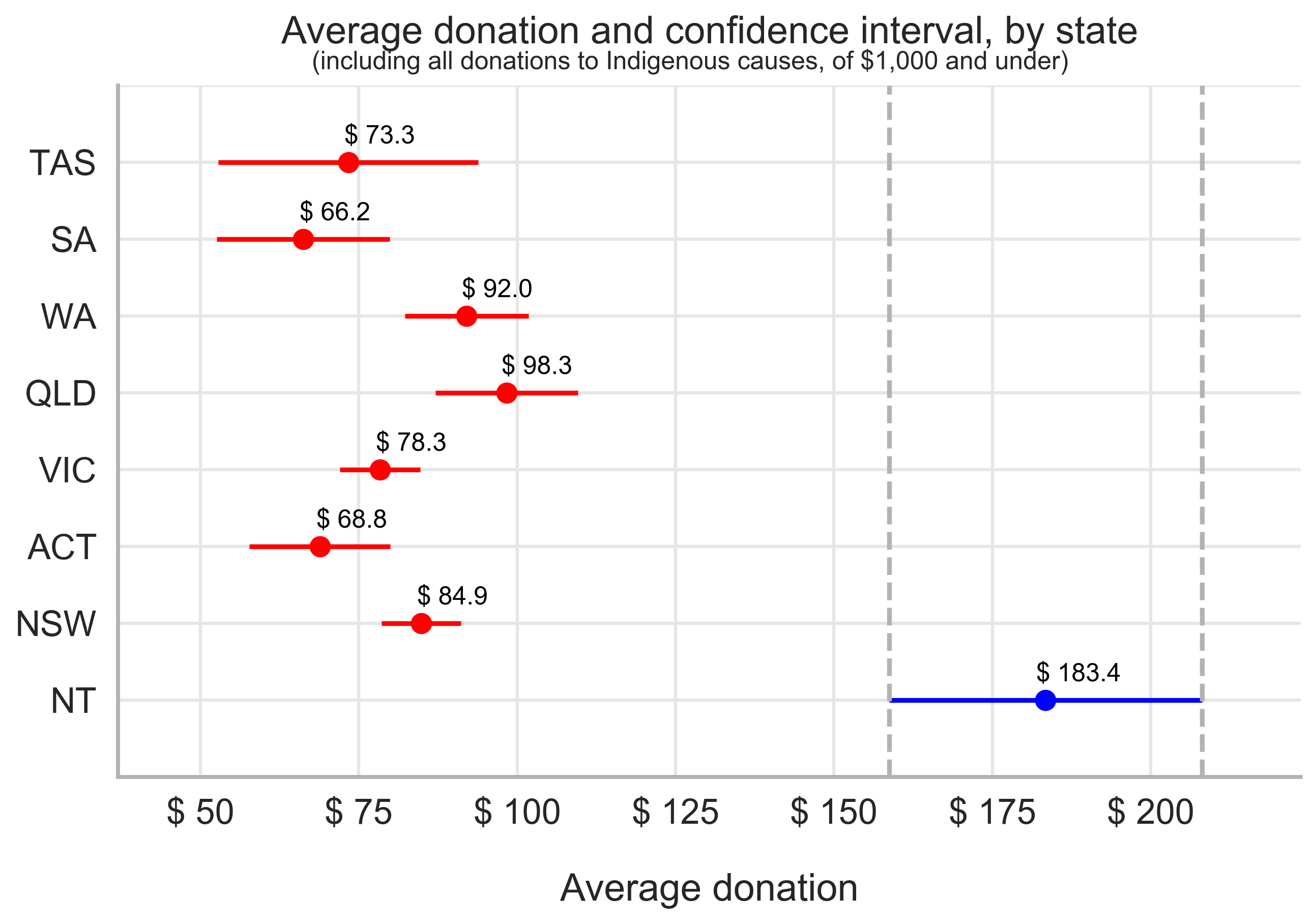 As shown, the average for all donations of $1,000 and under is statistically significantly larger than the average in all other states (by a relatively large margin of $100!). If we only look at the small donations (on the left), though, the difference is not statistically significant anymore. This shows that NT residents are more generous to Indigenous causes because of a relatively large number of large donations of between $100 and $1,000.

We also wondered if the average donation for the NT has been consistently higher than other states, or if this difference has fluctuated historically. Unfortunately, splitting the data by year (into seven buckets for 2010-2016) results in a small sample size (especially for the NT, for which we did not have a lot of data to begin with). Although the average NT donation value appears to be larger than most other states in every year between 2010 and 2016, the difference is not statistically significant, so we cannot draw any further conclusions.

Lastly, we investigated whether or not gender played a role in the increased generosity of NT donors. In the next chart, we split the percentage of donations and the average donation value by gender for all donations of $1,000 and under.

As shown on the left-hand side, the percentage of donations by female NT residents is slightly higher (+5%) than the percentage in other states. The average donation on the right-hand side shows that female NT residents donate approximately equal amounts compared with female donors in other states. The male donors, on the other hand, donate about $30 more (on average) than the male donors in other states. While there are many possible underlying factors that could contribute to this result (e.g. presence of the mining community, pay inequality, etc.) the difference in average donation for male donors may contribute to the overall observed generosity of NT donors. It should also be noted that while male donors donate larger amounts, female donors donate far more frequently. As a result, the total amount donated by male and female donors is roughly equal.

In summary, we found that NT donors do indeed donate statistically significantly higher amounts, on average, compared to most other states. Where this difference stems from remains an open question. Part of the difference may be attributed to the above-average generosity to Indigenous causes, and the observation that men in the NT donate higher amounts than men in other states (but keep in mind that women donate more frequently than men, especially in the NT).

We reiterate that correlation does not imply causation. Other (unobserved, uninvestigated) factors may also explain the high NT average donation. The relationship between the gender/state of the donor, and the corresponding donation value, is by itself (likely) a result of underlying cultural, socio-economic and inequality (e.g. salary gap) factors.

This analysis uses all GiveNow donations between 2001 and 2016, where the donation was $1,000 and under. Insights are based on the state and gender of the donor, the value of donation, the date of the donation and the "interest area" of the cause.

For further details, refer to the "Who Gives?" report at www.givenow.com.au/stats

With the help of: