The Joy of Giving - on Tuesday

When it comes to giving, I was a slow starter. My first involvement with philanthropy came at the age of eight, when I broke into the Project Compassion box on the mantelpiece - money destined for starving children in Africa - to keep myself in liquorice straps, musk sticks, and Fags (which in those days were a brand of children's lolly cigarettes).

These days I work with and for Australian not-for-profits, and every day I'm in awe of the power for good of ordinary people working together. I occasionally have to remind myself, though, that there's a stage before that, which is where some of the power comes from. It's ordinary people working alone - dropping coins into a charity tin, or sitting in front of a computer with their credit card, or looking for an envelope so they can mail a cheque: the great Australian donor.

Australians do give. In 2016, 14.9 million Australians aged 18 or older (80.8% of the adult population) gave a total of $11.2 billion to charities and not-for-profit organisations. Those giving gave an average of $764.08 each, with a median amount of $200 per donor. Most Australians, then, are prepared to give up approximately fourteen brunch-sized plates of smashed avocado (the internationally recognised measure of selfish indulgence) to help the needy and show them the way.

Is that a lot, or a little? What do we owe to our neighbour? That sounds a little theological, but in a broad sense it's a question that's come up a lot in analyses of the last election. Are Australians willing to make sacrifices - to give up tax concessions on negative gearing, say - for the good of others? Or is it true, as the Coalition thought, that the median taxpayer will fight like a rabid weasel to hang on to every single penny in their pocket?

A majority of Australians found ScoMo's case compelling, and few of them are complaining even now that tax season has arrived and $1080 in tax relief seems to have shrivelled into a couple of hundred bucks. A couple of hundred would, after all, enable most of us to double our generosity. Here, as in so many other areas, we as individuals and as associations have to do what we can to make up for the shortcomings of the coast-to-coast collective will.

Help is certainly needed. Most not-for-profits are seeing more hardship and having to do more. Australian giving, certainly, could do with a nudge, if not a prod. Luckily, just such a prod is available. Giving Tuesday is nearly upon us.

#GivingTuesday - this year, December 3 - is now truly a global celebration of generosity: a dedicated day of the year when people donate their time, goods, or dollars, or the power of their voice, to charities, causes and community groups. It started in the US seven years ago and has since spread across the world faster than an unnamed goose game. Australia is now one of fifty countries using this day to stir up the better angels of our nature.

GiveNow, Our Community's donations arm, is working with Australian not-for-profits to get the story out. We want to get a thousand of them behind the push - everyone from St Vincent De Paul to Knitted Knockers.

I wouldn't dream of suggesting that you yourself need any prompting to make other people happy. I will say, though, that you may appreciate a chance to get a little recognition for it - to chip in to make life better for others at a time when people have been lined up to notice. Giving Tuesday is a celebration, an alternative Christmas without the commercialism or the conspicuous consumption, and you really should check it out.

Myself, on the third of December I'm going to be joining up with Refugee Legal, one of my favourite community groups. I can chip in some of that tax refund, too. After all, I still owe for my musk sticks. 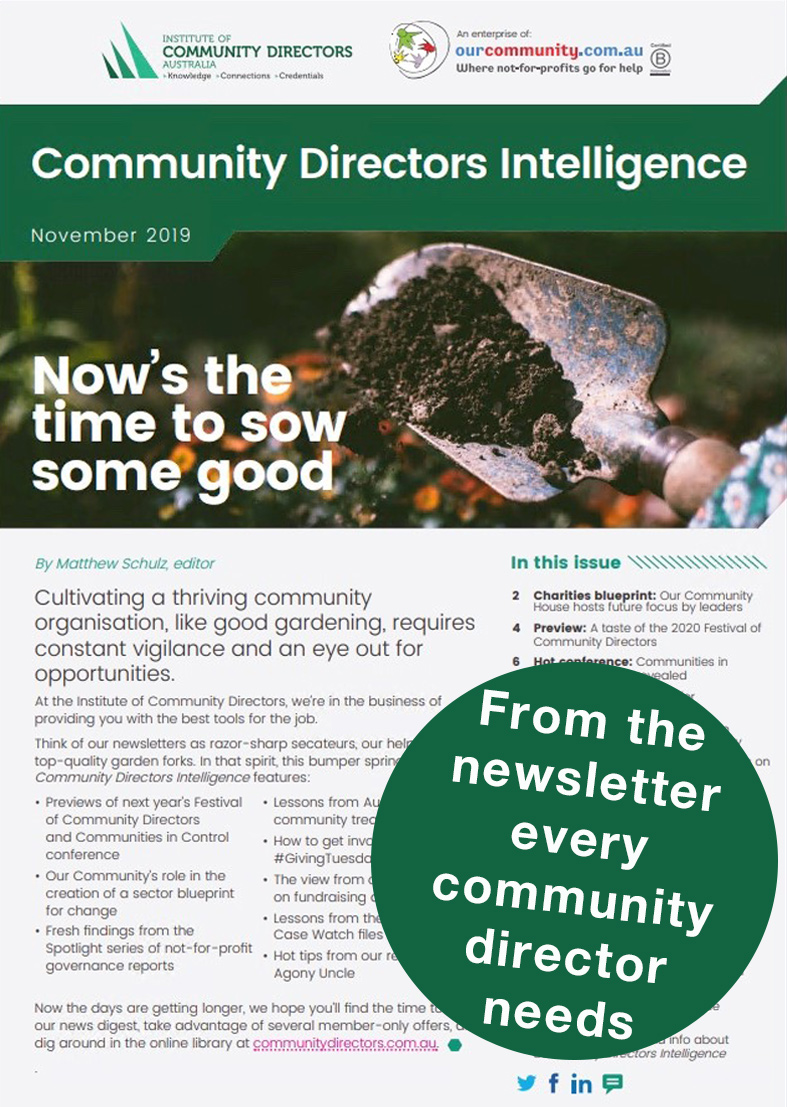 What Our Community thinks about other big issues

This commentary also appeared as part of a monthly column that's published in 160 rural and regional titles across Australia, from daily newspapers such as the Bendigo Advertiser and the Illwawarra Mercury, to weekly publications such as the Goulburn Post, the Cootamundra Herald and the Jimboomba Times.

We're proud to take a stand on progressive issues, which we're able to do as a social enterprise that's not tied to the purse strings of any government or corporate organisation.

Here's a taste of some other recent commentaries as they've appeared in some of those publications, as well as our own.

October 2019: Ignoring the data is an invitation to disaster

September 2019: What is the Catholic Church teaching us about love?

August 2019: The Uluru statement: Why it’s time for the Commonwealth to show some heart

July 2019: Why homelessness is worth this gamble

June 2019: After election, life and advocacy must go on

April 2019: Kids are teaching us the power of protest

Feb 2019: Australia Day honours: Why being rewarded for doing your job is un-Australian

November 2018: Community connection is an antidote to loneliness

September 2018: Good culture is the key to good communities